NPA Director of Pharmacy, Leyla Hannbeck, is the Medication Safety Officer (MSO) for all independent community pharmacies in England with fewer than 50 branches. Here are some of the key findings from the January to April (quarter 1) report. 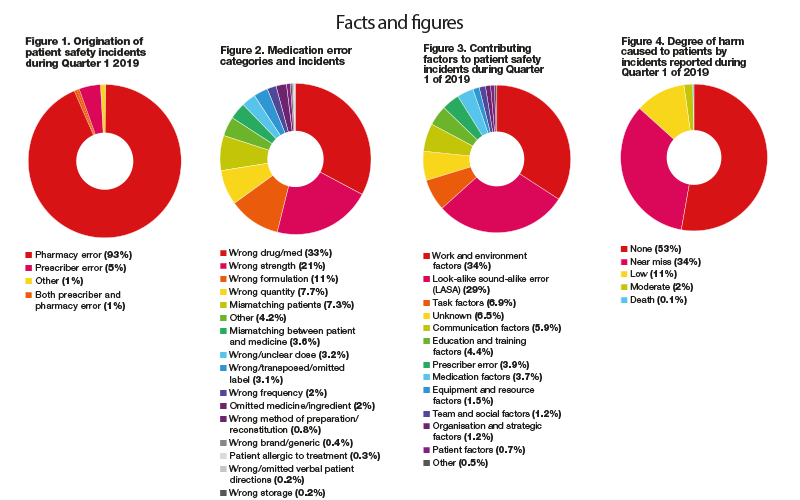 NPA Director of Pharmacy, Leyla Hannbeck, is the Medication Safety Officer (MSO) for all independent community pharmacies in England with fewer than 50 branches. Here are some of the key findings from the January to April (quarter 1) report.

There was a 29% increase in patient safety incidents in the first quarter of 2019 compared to Quarter 4 of 2018. The submission rate of reports almost doubled in February compared to January and March. The quality payments scheme may have contributed to this as a higher number of look-alike/sound-alike incidents were reported in February.

A total of 5% of incidents were due to prescribing errors (up from 3% during Q4 2018), most of which involved issues such as:

The two most common error categories reported continued to be dispensing a wrong drug/medicine (33%) and dispensing the wrong strength (21%). Wrong strength incidents included a patient receiving 600mg gabapentin capsules instead of 100mg. The patient took the wrong strength for five days resulting in extreme drowsiness. They were taken to hospital for assessment.

The majority of the errors were due to similar packaging leading to the pharmacy segregating its stock as part of its sharing and learning.

An incident occurred where a patient received a double dose of methylphenidate prolonged release tablets due to wrong dosage instructions on the dispensing label. The prescription, originally for Delmosart prolonged release tablets 18mg and 36mg at a dosage instruction of once daily, was instead written as “Take ONE tablet TWICE a day”. This led the patient to experience hallucinations due to the long-acting properties of Delmosart and the patient was taken to hospital for further medical assessment.

Work and environment factors continue to be the main contributing factor, mainly involving time pressures, distractions and increased staff turnover. The latter is resulting in an inappropriate skill mix and more staff undergoing training, which leads to the pharmacist self-checking more.

Although the error rate reduced by 1% for “moderate harm” compared to Q4 of 2018, all the incidents involved giving the wrong drug to patients who were then hospitalised. One patient received pravastatin tablets, instead of paroxetine tablets, and took it for three weeks before being hospitalised due to feeling “sick” for not taking the paroxetine tablets. A second patient received amisulpride tablets 200mg instead of amiodarone tablets 200mg, and took it for four weeks resulting in hospitalisation due to arrhythmias.

The NPA IRP, updated and launched end of October 2018, has proven to be user-friendly. The completed form can be sent via email, helping to reduce administrative time as it can be kept for pharmacy record keeping requirements. Key points for using the IRP:

To view the report in full visit the NPA website.