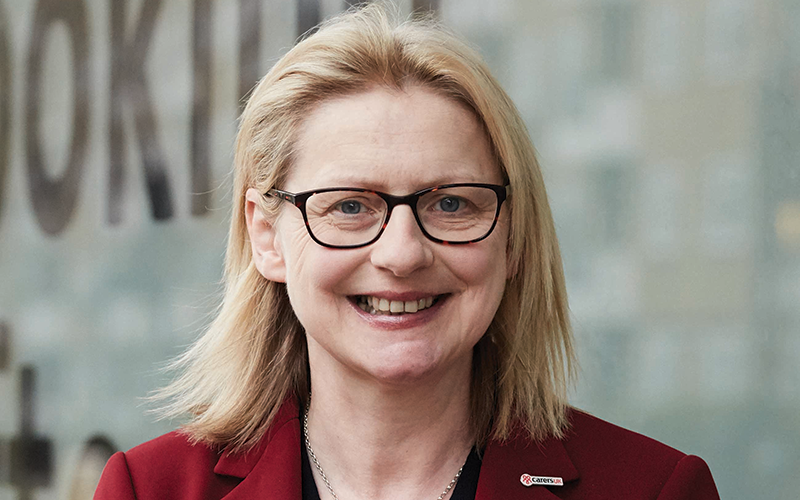 Helen Walker, chief executive of national carers charity Carers UK, explains the extensive difficulties facing carers during the COVID pandemic and how pharmacies are helping to alleviate some of the stresses.

As the pandemic has continued, there has been much greater awareness of the collateral damage - the cancer treatments interrupted, the surgeries delayed, the strains on mental health. Standing on the frontline of these issues are the millions of unpaid carers who have seen their already difficult duties become, at times, almost overwhelming.

It’s not even the 9.1 million unpaid carers at the start of the pandemic who are facing such challenges; their numbers have swelled by 4.5 million since March and now stand at 13.6 million. Whether it’s people caring full-time, or “sandwich carers” – who are trying to juggle work, family and caring duties – Carers UK Chief Executive Helen Walker says the situation is extraordinarily difficult.

“In March, our report Caring Behind Closed Doors told us about this massive number of new carers,” says Helen. “But many of the existing group of unpaid carers are also doing a huge amount of extra caring. Services simply aren’t open to help them take a break and, because of social distancing restrictions, they also have limited help from family and friends, who would normally be able to take some of the burden.

“Our newest report, Caring Behind Closed Doors, Six Months On, has told us that 64% of carers haven’t been able to take any breaks over the past six months, and three quarters of carers told us they were exhausted from caring around the clock. With the additional fear factor of bringing infection into the house, it’s a pretty tough time for them. There is no end in sight and many don’t know how they are going to cope.”

“Pharmacies have been a lifeline for carers, particularly during lockdowns where they are one of the few accessible services. It has been essential.”

Although the situation looks bleak, there is some assistance available. However, part of the problem in accessing it is that many carers don’t identify themselves in that role or understand that help is there for them. Equally, their role as carer can be overlooked by outside agencies.

“I think health professionals sometimes make a couple of mistakes. The first is that they don’t recognise carers’ knowledge. A carer will know more about the person that they care for – their specific medication, their habits, their problems and their challenges – than perhaps anybody, and certainly more than a medical professional,” Helen says.

“The other thing that health professionals perhaps don’t recognise is the importance of checking in with carers themselves. We need to make sure that carers are looking after their own wellbeing, as well as the person they are caring for. Invariably carers will look after themselves last and might not even self-identify as a carer. But it’s important that they do so they can start looking for help.”

It’s in this regard that local and community pharmacists have always played a valuable role, and never more so than during the past months.

“Carers have rated pharmacies as the most carer-friendly service they interact with, because pharmacies recognise that carers are picking up a prescription for someone else and might need just a little bit of additional support. During COVID, we’ve heard from carers who have said they’ve had excellent support from pharmacies,” says Helen.

“Carers are entitled to a free flu jab and it’s important that they get it. It would be great if pharmacists could raise that issue with them”

One of the most important things pharmacies have done during the pandemic is to talk to carers and provide emotional comfort.

“Other than the person they look after, a pharmacist might be the only person that a carer talks to that day or even that week,” Helen says.

“So pharmacies have been a bit of a lifeline for some carers, particularly during lockdowns when tighter restrictions mean that pharmacies are one of the few accessible services, and it has been an absolutely essential service. They have been a vital source of support and reassurance. We’ve even heard of pharmacies who have adapted to carers’ needs and made sure medication has been delivered if carers couldn’t come in to pick it up themselves.”

In addition to these measures, because of pharmacies’ particular ability to effectively signpost to other provisions, Carers UK teamed up with 100 pharmacies in England on Carers Rights Day (26 November) to provide pharmacy bags bearing the number of its helpline.

“With the help of these pharmacies, we wanted to get the message out: are you an unpaid carer? Do you have any questions? And we especially want to make sure carers understand that they are entitled to a free flu jab this year,” Helen says.

As we head deeper into winter and the Government’s ‘second-wave’ restrictions take effect, these messages – and the role pharmacies can play – will be ever more important.

“This winter is going to be tough for everybody, but it’s going to be extraordinarily hard for carers. The big challenge is that most formal and informal support that they would normally rely on simply isn’t there and respite centres aren’t reopening,” says Helen.

“Many found the different local lockdowns and regulations confusing. Often, you had to really dig deep to find exactly what you were and were not allowed to do. With these tightening restrictions, carers are worried about whether they are going to be able to carry on. They are teetering on the brink because this has been going on for seven months now without a rest.

“Pharmacies are going to play a crucial role in supporting them through the winter. They are the one constant that is open, that is there to provide the medication and support that carers need, and which is a warm and friendly environment where somebody might ask how they are doing. People always ask about the person they are caring for. But, right now, that is absolutely invaluable.”

Caring for your carers

“There are the specific practical measures that pharmacies can take, such as being open at a time when carers are able to pick up a prescription, or making a delivery.

“But, just as important, is taking some interest, offering that human contact, and even helping them recognise their role as a carer. Many say they are just looking after their husband or their mum, but actually they are a carer.

“Finally, carers are entitled to a free flu jab and it’s important this winter that they get it. It would be great if pharmacists could raise that issue with them when they pick up their prescriptions.”