Q&A with Keith Ridge on his retirement 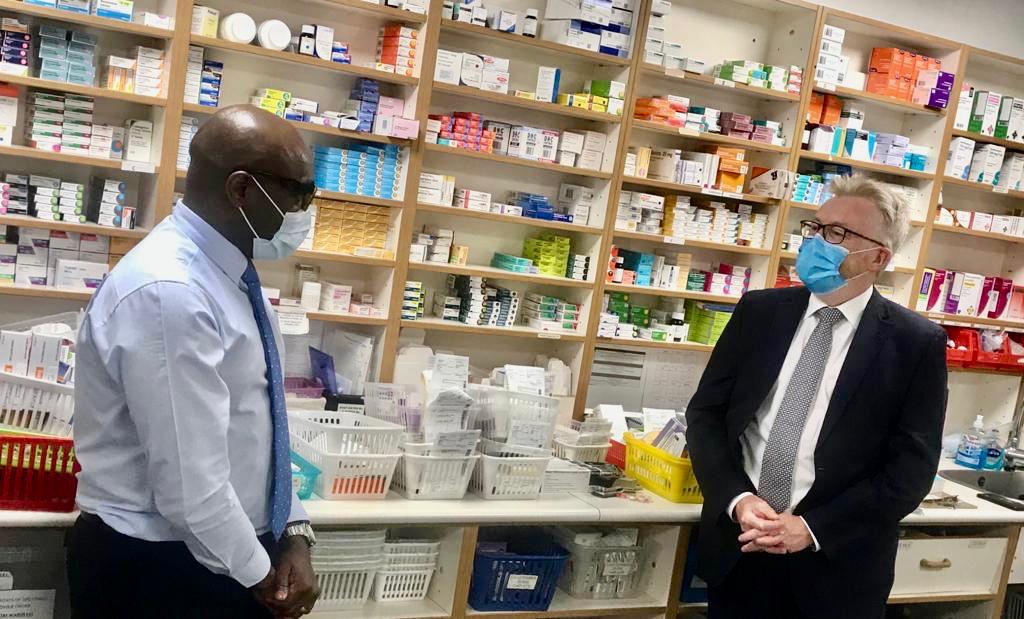 Chief Pharmaceutical Officer Dr Keith Ridge CBE retires this week after 16 years in the role. He has been the NHS’s and Government’s most senior advisor on medicines and pharmacy in England. He leads a team of pharmacy professionals, working at both national and regional levels, including 14 clinical fellows, to ensure pharmacy professional advice is deployed effectively to improve patient care. He is also head of profession to the 70,000+ pharmacists and pharmacy technicians registered in England.

In this article, he looks back on his long tenure and wishes the sector well for the future.

On….My first day in the job

I joined the Department of Health on 1 March 2006 after working as director of pharmacy in North Glasgow University Hospitals and University Hospitals Birmingham but had already been principal pharmaceutical officer at the Department so I knew what to expect. I knew I had to hit the ground running because system change takes a long time and so we immediately started work on the vision which eventually became the White Paper Pharmacy in England: Building on Strengths, Delivering the Future which was published in 2008.

We also started work on the concept of medicines optimisation for pharmacy practice with the aim of creating a more patient-centred, outcome-based approach to help drive safe and effective medicines use – which is now widely accepted across the NHS. Another early piece of work was the establishment of the independent regulator the General Pharmaceutical Council (GPhC) in 2010.

The pace of change in terms of technology and medicines has been exponential but also the recognition and the understanding of what a great contribution pharmacy professionals make to clinical teams in all parts of the NHS is very different.

There’s been a transformation of pharmacy professional practice in general practice: we’ve established clinical pharmacy practice into general practices so people most in need can benefit from structured medication reviews with a pharmacist who has had additional clinical training and receive care of a standard equivalent to that in hospitals. This has resulted in the appointment and training of thousands of new pharmacists and pharmacy technicians under the NHS Long Term Plan.

Antimicrobial Resistance (AMR) is an ever-present issue for us all now. As the Senior Responsible Officer for Prescribing for AMR, I contributed to the UK National Action Plan and 20-Year Vision for AMR and we have created a specialist pharmacy antimicrobial stewardship workforce, which has resulted in significant reductions in inappropriate use of antibiotics over the last decade, particularly in primary care. But AMR is a major public health threat and so this work is still of critical importance, as is the role pharmacy has to play in terms of reducing the carbon emissions from the medicines supply chain and I’m pleased to say pharmacy professionals are contributing at the heart of the NHS’s Net Zero plan.

The adoption of new medicines technologies and data into the NHS to benefit patients and increase value is another area where pharmacy has led the way and is doing increasingly so due to the complexity of medicines.

Finally for me personally there has also been the cultural realisation that we don’t need ‘a pill for every ill’ – often the best treatment is a supportive shared-decision-making conversation, a social prescribing intervention, such as exercise, or a rest, and this is at the heart of the overprescribing review report which I published in September 2021. The NHS’s first National Clinical Director for Prescribing will be leading its implementation along with my successor David Webb.

I think our biggest success, working with the sector, has been the Pharmacy Integration Programme which has consistently piloted, evaluated and established new clinical services, provided education and training for pharmacy professionals, including independent prescribing for pharmacists, the first cohorts of which start this month, and supported the implementation of those services through our regional and integrated care system pharmacy teams.

The biggest challenge has been the reform of the Community Pharmacy Contractual Framework which is a work in progress especially since changes to support the introduction of greater technology and skill mix have been delayed by the pandemic. My role has been about helping to find a productive balance between the interests of patient care, the Government, the NHS and the community pharmacy sector including pharmacy professionals. We need to ensure the sector is not wholly reliant upon dispensing as its main activity and that we create space for pharmacy professionals to use their expertise to provide clinical services for patients.

A key part of this transition is the introduction of new clinical services into community pharmacy as well as the expansion of its public health role such as through vaccination programmes where community pharmacy teams are playing a pivotal role.

Of course, looking to the future, another success will be that pharmacist registrants who qualify from 2026 will all be trained as independent prescribers during their five year course and therefore able to work as integrated clinicians in the wider primary care NHS team and beyond from day one.

On….opportunities for the sector now

Establishing and consolidating the role of community pharmacists in primary care networks to ensure they are working ever more closely as primary care multi-professional teams, enabling the provision of more accessible clinical services in community pharmacy. Investing in upskilling pharmacy professionals in public health and population health management, with a particular focus on addressing health inequalities. Continued integration with the NHS, particularly digital interoperability, will be another game-changer. Making sure we all embed the principles of the Inclusive Pharmacy Professional Practice initiative into our everyday work.

In support of all of this, community pharmacy will need to play a key role in implementing and supporting the current changes in initial education and training standards which began in July 2021. The future pharmacist must be appropriately skilled to deliver safe clinical care to patients and increased value and sustainability from the medicines we use within integrated care systems, hospital trusts and primary care networks (community pharmacy and general practice).

As a result of these reforms, all pharmacists will be trained to the same enhanced clinical level on registration by 2026, creating a more flexible workforce which will make it easier to move between sectors and allow for a more flexible and rounded career structure.

The new five-year initial education and training programme is also the first step to a defined career structure for pharmacists across all sectors. The GPhC and Pharmaceutical Society of Northern Ireland have recently announced the creation of a formal group focused on the assurance and oversight of post-registration practice of pharmacists and pharmacy technicians.

The rapid progress we’re making and the positive response from the sector has opened up greater opportunities and perspectives. It’s a really exciting time to be in community pharmacy as new referral routes are established from general practices and hospitals; clinical services are being developed at pace, for instance the possible inclusion of anti-depressants in the New Medicine Service, and the prescribing of contraception by community pharmacists; and the role of pharmacy technicians is being advanced. Liz Fidler has been appointed to a new role in the Chief Pharmaceutical Officer’s team at NHSE&I as Senior Professional Advisor: Pharmacy Technician Practice, and this will help us progress the new initiatives for pharmacy technicians that have been developed and/or tested over the last few years. These developments and others point to a positive future for community pharmacy teams.

At all times see yourself and approach your work as an NHS clinical professional, an important, valued and equal member of the multi-professional team in primary care.

I’ll be relaxing a lot more and doing the things I enjoy: spending more time with my family; travelling; walking; and of course following West Ham!

A final message for independent community pharmacists and the wider sector:

It’s the most important one, which is to thank the National Pharmacy Association (NPA) and its members for your support, contribution and challenge. I’ve had the most interesting and useful conversations with many NPA members and staff over the years and appreciated the open nature of those discussions despite the stresses and strains which everyone has been under. I wish all NPA members and the wider sector continued success in your work as valued NHS colleagues. Thank you too for your brilliant response to the pandemic and vaccination programme which has shown everyone how important community pharmacy is to the NHS in England.

I also want to thank my team and wider pharmacy and policy colleagues at NHS England and NHS Improvement including my deputies Dr Bruce Warner and Richard Cattell who have all been brilliant over the years. It really has been an extraordinary team effort and I appreciate the contribution of everyone who has helped deliver on these achievements.

“We look forward to working with David on a can-do agenda for community pharmacy. He has a huge task ahead, including covid recovery and long term NHS ambitions such as tackling antimicrobial resistance and increasing access to primary care. His success will depend heavily on a productive partnership with NPA members, in relation to clinical services, preventative care and many other areas.”