Going green – how pharmacies can protect the environment 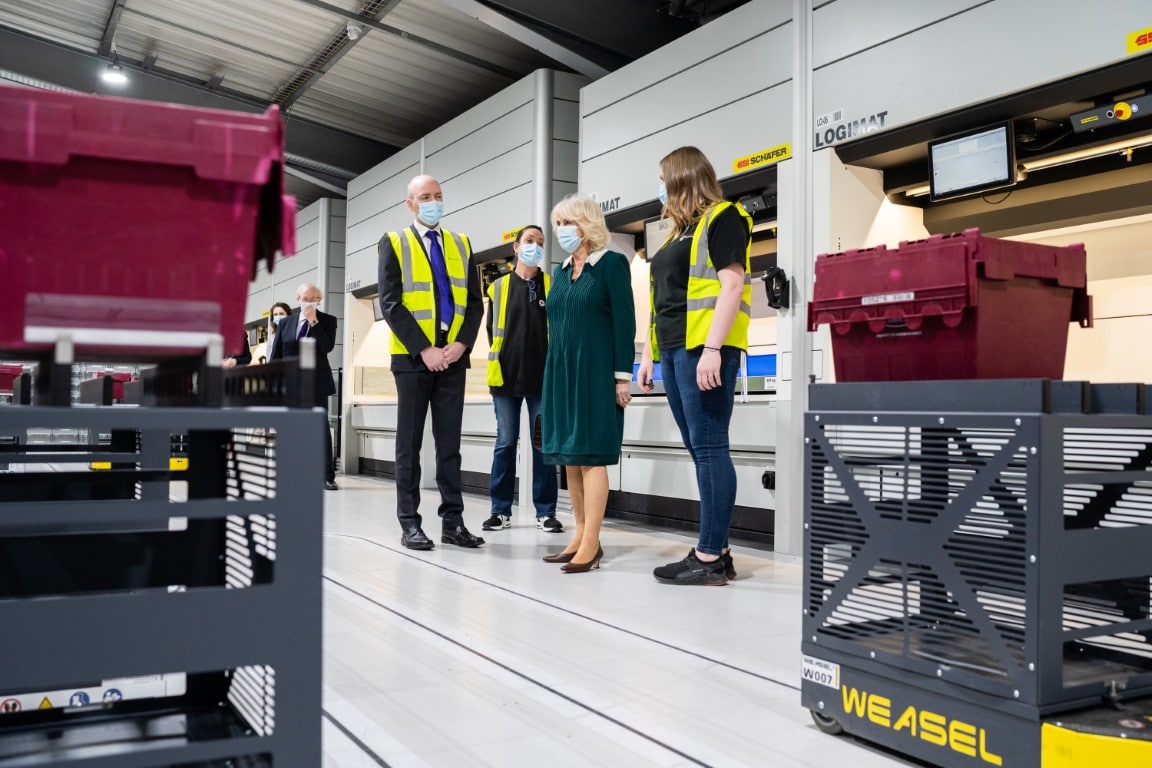 Pictured: HRH The Duchess of Cornwall visited the Kamsons Pharmacy Head Office and Warehouse in Uckfield which makes use of weasel robots to transport medicines. [Picture courtesy of Kamsons Pharmacy]

Climate change is one of the most significant ecological and health related threats facing humankind. Its impact affects everything that we take for granted – the air we breathe, the food we eat and the environments we call home.

Meanwhile, air pollution accounts for 1 in 20 deaths according to the NHS. Reducing emissions will contribute to reducing admissions of cases of asthma, cancer and heart disease.

The health and care system in England has a big role to play – it is responsible for an estimated 4-5 per cent of the country’s carbon footprint. If the country is to succeed in its climate goals, the NHS has to be a major part of the solution. It is for this reason that the NHS aims to deliver a ‘Net Zero’ National Health Service initiative, which sets out the advances that the organisation has already made in improving its carbon footprint and reducing the environmental impact of services.

The aim is to reduce emissions and become the world’s first 'net zero' national health service.

The role that community pharmacies play will play in all this is significant - medicines contribute about 25 per cent of carbon emissions from the NHS. Reducing medicines waste is one way that pharmacy teams can not only help control drug spending but also help in the fight against climate change.

In an online consumer poll which surveyed over 2000 respondents, conducted during NPA’s Ask Your Pharmacist week in November, about half of patients said they sometimes dispose of unwanted medicines in a pharmacy.

Medicine waste can occur due to patients over-ordering medicines on repeat prescriptions, or continuing to order medicines which they no longer take. According to NHS England around £300 million of NHS prescribed medicines are wasted each year. This includes an estimated £90 million worth of unused prescription medicines that are retained in people’s homes at any one time, £110 million returned to community pharmacies over the course of a year, and £50 million worth of NHS supplied medicines that are disposed of unused by care homes.

A growing number of pharmacies are investing in greener, environmentally friendly infrastructure.

Last year NPA member Kamsons Pharmacy invested in a new state-of-the-art warehouse in its Uckfield headquarters. They also use innovative ‘weasel’ robots which help transport medicines across the warehouse.

Mark Donaghy, Professional Development Manager at Kamsons tells InPharmacy that it’s the first pharmaceutical warehouse in the country to implement this technology, after much development work.

The warehouse has also been covered in 925 solar panels which are used to power some of the vehicles that deliver medicines to the pharmacies and directly to patients as part of Kamsons Pharmacy’s drive towards becoming carbon neutral.

“We've got electric vehicles which are now being charged overnight and the fuel is free of charge. It's all coming from the sun,” says Mark.

“We're looking at purchasing more electric cars and hope to have half a dozen of pharmacies doing an initial rollout of charging points for these electric vehicles. We're also looking at getting larger electric vans to do the transport to the warehouse to the individual pharmacies.”

Another NPA member implementing various energy saving and environmentally friendly initiatives is The Pharmacy Group, which has 32 community pharmacies in Yorkshire.

“In the last five years we've been planning more about how to be greener and limit our carbon footprint,” Andrew Stone, Chief Operating Officer at The Pharmacy Group, tells InPharmacy.

He says: “There can be a lot of waste in our profession, especially with the old tablets that come back.

“I‘ve been in the business for 35 years. As we've got older and starting to see younger recruits join the business, we’ve thinking more about our impact on the planet and what were' going to leave behind for the next generation.”

Some of the things which the Pharmacy Group have done to help the environment include using biodegradable prescription and carrier bags, installing solar panels at their head offices and using more electric vehicles for medicine deliveries.

“We've also installed Pro Delivery Manager which optimises the delivery route when we use the vans so that's cut the fuel bill by about 12 per cent.”

Andrew says he would “absolutely” encourage other pharmacies to start implementing “greener” initiatives.

“I’m sure every pharmacy group looks at how they're affecting the environment. But it’s small changes, like bags and bag labels that are biodegradable, that can help. Whenever we've refurbished a building, we've also installed bike racks and showers in to encourage staff to cycle to work.”

He adds that pharmacy underfunding hasn’t made it easy for The Pharmacy Group to be more ‘green’.

“All of these things cost the pharmacy as there's no funding or government schemes for this kind of thing.

“I'd like to get every store carbon neutral now but can’t afford to do it. Our passion is being tempered by affordability so at some point we have to draw a line on cost.”

He adds pharmacy can still make a big impact with a small amount of money.

“We've introduced two bins in our pharmacies for instance, instead of one big bin where we separate our cardboard and paper for recycling. It’s an extra £3 per shop, per week. That's an extra £100 a week but we feel it’s worth it.”

Protecting the planet as a key company strategy

The Avicenna group, which runs 139 pharmacies around the country and supports 1000 other pharmacies as a buying group, believes a pharmacy needs to be “better for the planet”.

"Our overall vision is that we believe in a ‘better pharmacy’,” says CEO of Avicenna Jonathan Power.

“We're building Avicenna sustainability because we want to make a positive contribution to the planet. The focus areas are reducing waste, eliminating harmful emissions, and generally limiting the resources that we consume.”

Much like the NHS and its goals to be the world’s first net zero carbon health service by 2045 Avicenna is doing the same but at a faster pace.

“We want it to go a lot quicker than that and we reached the decision to accelerate our own action on that. Last year the Avicenna buying group and every one of our pharmacies became net neutral.”

They partnered with a company called Normative who made an independent assessment of Avicenna’s emissions. With that result they worked with an organisation called Natural Capital Partners to help them to meet their carbon neutral goal.

“We provide finance to a project called the Rimba Raya Biodiversity Reserve in Borneo, to help stop deforestation in a location that was already designated for palm tree plantations.”

“All of the emissions that we do release which are mainly around transport and electricity, we're offsetting every carbon that we emit through this project.

“From that point onwards we started to invest in offsetting every single point of emissions in the business which we measure quite carefully,” says Jonathan.

Avicenna also piloted the use of electric vehicles and have made a commitment to no longer purchase any new or used petrol or diesel vehicles.

“That includes either delivery vans, personal vehicles or company cars. We're going to be phasing out our existing fleet and replace them all with electric vehicles.

“We're also in the process of migrating all of our electricity suppliers to 100 per cent renewable - switching them away from fossil fuels towards a 100 per cent solar and wind. We're also focused on reducing the consumption in the first place. We're going through a programme of converting our in store lighting to LED and installing smart meters throughout our estate so we can really measure and manage it.”

The other thing they’re looking into is how to reduce their waste.

“That's wasting in-house, in our offices, in our pharmacies, but also our patient waste and providing them with ways to recycle. It's really pains me that amount of blister packs and dosette boxes that go out of every pharmacy every day which are quite often non-recyclable plastics.”

Jonathan believes not taking steps to help the environment is a “business risk” and every pharmacy, big or small, can make incremental changes to protect the planet.

He says: “Everyone - independent, small or large pharmacy can reduce their consumption. They can switch to sustainable means. It doesn't always cost a lot of money.  Some of what we're doing is very expensive but also some of what we're doing saves money. If you reduced the consumption of electricity in your store for example, it’s going to reduce your electricity bill at a time when we're seeing significant inflation in energy costs. It's the right thing to do for our planet. It's also the right thing to do for your business.

“Our consumers expect more and more businesses and organisations to do this. If we don't adjust to that going forward it’s a real business risk. Our team also really love and respect the fact that we're working on this and I think it helps them feel like they're working for an organisation that cares and has the same values that they do.”

For more information about the Greener NHS Programme and how you can help reduce your carbon impact go to: www.england.nhs.uk/greenernhs/

Recently the NPA partnered up with pharmaceutical company Novo Nordisk, to launch PenCycle, a recycling initiative for pre-filled injection pens. It is designed to address the challenge of recycling injection pen devices, used by people living with diabetes, obesity and growth disorders, which otherwise end up in landfill or incinerated.

Users of Novo Nordisk’s pre-filled FlexPen and FlexTouch devices, used to dispense insulin and other medications, will be able to recycle their empty pens as part of this initiative. This can be done through returning their pens via local participating community pharmacies, via pre-paid Royal Mail boxes, or through an ‘at home’ collection pilot service for people using growth hormone pens.

Many healthcare settings are also currently reviewing their own practices to look for changes they can make to help shape an environmentally friendly and sustainable future by reducing their carbon footprint.

Salford Clinical Commissioning Group ran a carbon footprinting project in its region which showed that 12 per cent of the carbon footprint of primary care is due to the prescribing of inhalers, particularly pressurised meter dose inhalers (pMDI). Around 95 per cent of the carbon footprint of these inhalers is due to the propellant gases used in them. The NHS Long Term Plan set a target to reduce absolute inhaler emissions by at least 50 per cent by 2028 but in Salford they hope they can achieve this target by 2025. They have created resources for local healthcare settings, on using dry powder inhalers which have a lower carbon impact than pMDI inhalers.